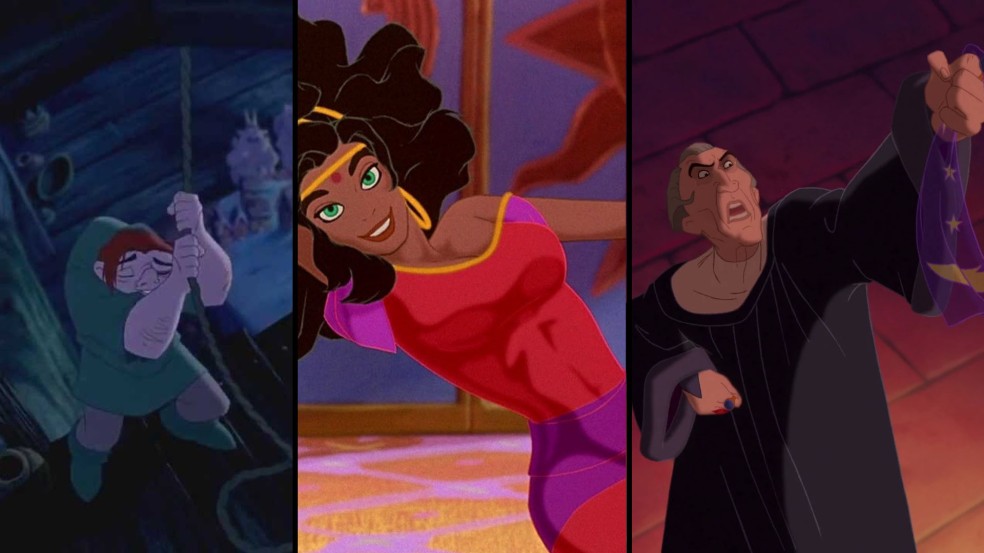 I’m a big fan of Disney’s Hunchback of Notre Dame. Look, there are plenty of reasons to not gel with this film. It has weird tonal problems, the villain wants to commit genocide and feels weird about his boner, it’s an adaptation of a French novel that seems largely concerned with architecture over people. In my younger years, I was certainly more of a Lion King fan but as I entered adolescence my tastes changed. Hunchback was now the film for me. There is a lot to like thematically in Hunchback of Notre Dame, and themes tend to pull me in. The tyranny of godly men, the oppression of minorities, don’t judge a book by its cover, and so on. When I was an angst-ridden teen, convinced that I was an un-loveable monstrosity, that last theme appealed a lot. Now that I’m older, there’s another theme that grabs me. How do the men of Disney’s Hunchback of Notre Dame view and objectify Esmeralda?

So, you might have seen the title and wondered what the hell a Madonna-Whore complex is. Well, it all goes to cocaine-snorter and dude-with-mummy-issues Sigmund Freud. Look, as you might tell from the previous sentence, I’m no fan of Freud. I think that some of his ideas represent his own neurosis rather than legitimate theories. However, Freud coined a tonne of useful phrases that made their way into media analysis via Freud’s colleague, Carl Jung, and through Jung down to Joseph Campbell of Hero’s Journey fame. Anyway, the Madonna-Whore complex could also be called the virgin-whore dichotomy. It is a psychological framework where women are framed as either ‘virgins’ or ‘whores’. Virgins are placed on an impossible pedestal and held up as an ideal rather than a person. Whores are demeaned as objects only good for sexual pleasure.

You might already see where this is going. Some have critiqued the Disney film for changing the ending of the book. Well, apart from the obvious reasons why that wouldn’t happen, there was another assumption built into this change that I believed when I was younger. My assumption when I was younger was that if the ending was changed so that Quasimodo and Esmeralda live, then surely, they would get together, right? Here’s why I now think that assumption is wrong and it all ties into that Madonna-Whore complex thing.

So, in the soundtrack of Hunchback of Notre Dame, there is a song called Heaven’s Light/Hellfire. It’s actually two songs but jamming them together in the soundtrack really plays up the contrast between the two. Heaven’s Light is sung by Quasimodo and is a soothing melodic song sung by a tenor. Tenor songs tend to skew younger and often a tenor in a musical is the love interest/protagonist. In a musical, if there is a villain, often they will be a baritone/bass (these rules generally apply to men, women have different musical voice categories). Hellfire is sung by Frollo who sings a dark brooding song in a deep baritone. Interestingly, Heaven’s Light uses a variety of strings and woodwinds, ending in bells and chimes. As the song transitions, drums underscore the bells and chimes. Hellfire contains Gregorian chants, a pipe organ, drums and horns. These two songs both concern Esmeralda.

Hellfire is a song about Frollo’s lust for Esmeralda and how his desire is a temptation from the Devil. He is convinced that there are only two ways to deal with his lust for Esmeralda. Death or Ownership. Frollo sees as a whore within the Madonna-Whore complex. To Frollo, she is a creature of lust and desire. He even projects his lustful thoughts onto her. While the crowd of Papal showers chant ‘mea culpa’ (my fault), he protests ‘it’s not my fault, it is the gypsy girl, the witch who sent this flame’. Frollo externalises his feelings onto others as a way to absolve himself of his guilty thoughts. Well, there’s a reason he’s the villain.

In contrast, Quasimodo sings about how Esmeralda reminds him of lovers that he has seen from his tower. He compares the love shared between them to Heaven’s Light. Quasimodo wishes for Esmeralda to love him the way that those lovers loved each other as he watched from afar. While he is doing this, he even crafts a wooden figure of Esmeralda. While this song paints him in a better light than Frollo, there is still an issue with this. Quasimodo is putting Esmeralda on a pedestal and holding her to a literal unearthly ideal. If Quasimodo maintained this mindset and Esmeralda acted fundamentally human, how would he react?

Often, we (men) think about the consequences of the whore side of the dichotomy. However, we mustn’t forget that neither side is ideal. Sometimes, we can absolve ourselves of sin by noting that we don’t think of women as whores, not stopping to consider that there is a dangerous other side of the coin. Often, we put stress on women because they are seemingly hypercompetent. However, this hyper-competence that we often demand of women in both domestic and professional circumstances is often a response to the pedestal thinking that can develop in men.

So, the ending that they ultimately went with for Disney’s Hunchback makes some sense. Quasimodo venerates Esmeralda to an idea, rather than as a person. Frollo sees Esmeralda as a personification of his lustful thoughts. Phoebus engages with Esmeralda as a fellow human being. That’s one thing that I think should be taken from Hunchback of Notre Dame. Was the original purpose of the text? Probably not, but it emerged nonetheless. There are certainly flaws in the idea as Quasimodo shows that he can grow beyond his ideas when he turns on Frollo and sees that there is cruelty in the world. Perhaps this will lead Quasimodo down a path where he sees the humanity of those that he venerates from atop his tower.

Or perhaps the solution is a polyamorous relationship between Quasimodo, Phoebus, and Esmeralda. Disney would never go for that, though.