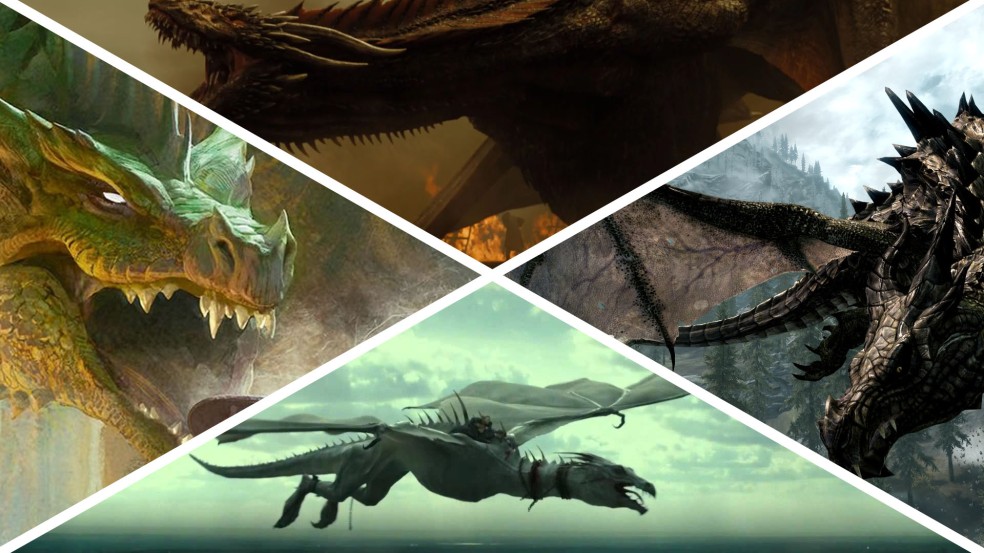 Dragons are emblematic of the fantasy genre. Chances are that the word dragon conjures up some very specific ideas in one’s head. Dragon: wings, between two and four limbs, scales, breathes fire, hordes wealth. Now, if you were being contrarian or were brought up on different fantasy media, your mind might instead be drawn to the idea of the Chinese dragon. These are often the two forms we most often have in our heads. With such a clear vision of what dragons are, it’s worth using dragons as a yardstick for other fantasy tropes.

First, what is a trope? A trope is like a cliché. A more literary view might call them devices. Tropes are the building blocks that authors use. They’re the shared language of storytelling that rests on each other. Let’s look at some examples of fantasy tropes. Fantasy is interesting to think about from this perspective because so much of it is born out of Tolkien. Elves, for instance: pointy-eared, elegant, condescending, and long-lived. Dwarves: like to drink, have a mining economy, big bushy beards, stout, and brawlers. Orcs: bruisers, often enemies with humans and other races, guttural language, tend to lack their own cities. Another trope of fantasy? Maps. How often does a fantasy book have a map at the start? These maps tend to have the sea to the left of the map and a large landmass that continues off the right of the map. Not every fantasy story has all these elements but many of them do.

Now, dragons. Dragons also feature in much fiction. They can be benevolent or malevolent. We already know their distinctive characteristics as mentioned above. Now, you’ll often find that the craft of storytelling is all about the mixing of old ideas and new ideas. You use the established ideas as a bedrock to base your new concepts around. Usually, the things that are introduced are created around a core idea that the author is trying to convey.

A Song of Ice and Fire as an example notably includes a European-inspired world which seems to have few magical elements in the first book, A Game of Thrones. There is mention of dragons, who have been dead for a generation but there is little mention of high fantasy elements otherwise. As the stories go on, we get introduced to the Others, also known as white walkers, who Martin describes resembling the Sidhe (figures of Celtic mythology who are often connected with the contemporary fantasy concept of the Fae). Another group introduced in later books are the Children of the Forest who are magically figures who live in harmony with nature and were hunted by early man. These two figures could be Martin’s more grounded take on dark elves and wood elves. In that regard, the Others are connected to ice and tie into the thematic battle of fire and ice that is to come. Martin’s entire purpose with the Song of Ice and Fire series could be surmised as being about how petty politics is distracting from the oncoming storm that will be the War for the Dawn. Martin’s story is an allegory for climate change. He used the elements of fantasy and changed them to say something very particular with his work.

Thus, when thinking about dragons, think about their purpose in the story. Then you can reimagine them in that context. How does altering the setting alter dragons? Dragons in space, for instance, might take some influence from Lovecraft and other less problematic cosmic horror creators. The fact that Western dragons hoard wealth in caves is interesting. They have no need for wealth in their caves beyond their desire for it. There is probably an anti-capitalist idea in that. Alternatively, maybe if dragons didn’t live in caves, they could create a dragon civilisation. How would a dragon civilisation work? Would they subjugate humans to perform manual labour that they couldn’t? The hero could be someone born into subjugation and rallying against their chains. Then the story becomes an anti-slavery parable. What if we looked at dragons as they exist as a product of our knowledge of dinosaurs? Within that, you can create a whole range of new dragons. Dragons based on long-necked dinosaurs, pterosaur dragons, dragons with fluff, a whole draconic ecosystem.

In many ways, the world is your oyster when working with such well-trodden ground as dragons. The only thing to really be aware of is two-fold: some people will have expectations of dragons that may clash with your new ideas and write with purpose. To the first point, those people aren’t your audience and if you write with purpose, your dragons will likely click with an audience. You can also write backwards in a way. If you want dragons to have fluff, explore that idea and then go write it. If something doesn’t ring true, unpack it and revise. Any idea can have wings if adequately developed.