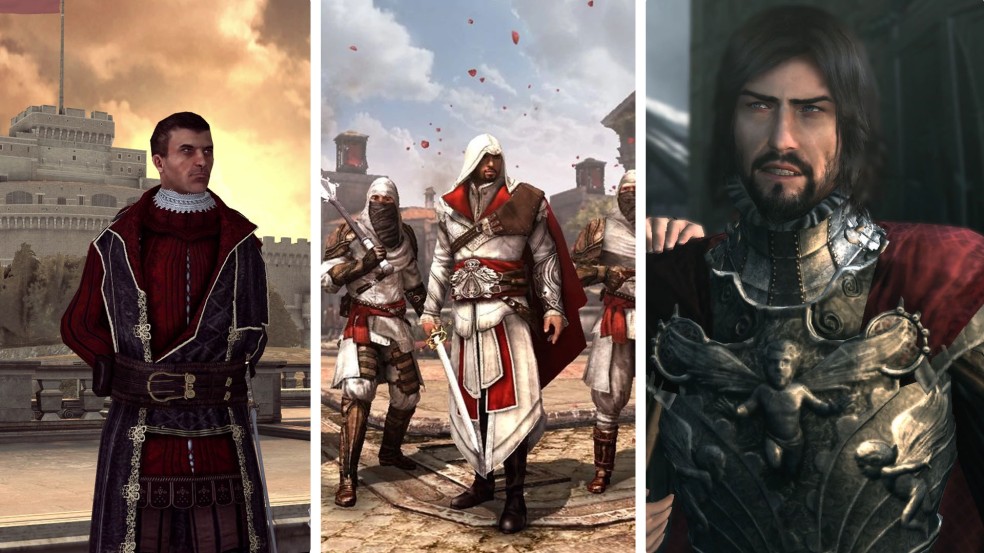 So recently I’ve been revisiting films from the Marvel Cinematic Universe. Looking back at them I discovered some interesting details about how the world has changed, how I’ve changed, and how the work reflects the world that was to come. Now, I’m looking back at entries in the Assassin’s Creed series. This might seem like an odd choice. My previous versions of this format were revisiting the red-headed step-children of the largest media franchise in the world at the moment. Assassin’s Creed is probably notable for being a consistent AAA franchise in the gaming landscape. It might not the biggest in the market but it takes up a certain amount of real estate in the gaming space. So, without further ado, Assassin’s Creed Brotherhood.

Assassin’s Creed Brotherhood occupies an interesting space in the Assassin’s Creed series. Each major entry has two main plots running through them. Desmond, a bartender and former assassin, relives his ancestor’s lives through the Animus. Inside the Animus, we control one of Desmond’s ancestors from a point in history. Each numbered has a different ancestor and time period. The first being set during the Third Crusade in the areas surrounding Jerusalem. The second being set during the Renaissance across various Italian cities. The third being set during the American Revolution around the American colonies. Following the third game, the general trend continues but the metanarrative around Desmond changes significantly. Assassin’s Creed Brotherhood sits between numbered entries but its story seems somewhat fundamental to understand the context of the next major game.

Assassin’s Creed Brotherhood primarily follows Ezio as he travels to Rome continuing his battle with the Borgia family. The game’s story picks up right after the previous instalment. Ezio enters the First Civilization vault beneath the Vatican and finds himself the conduit for a message to Desmond in his future, the game’s present day. From there, Ezio considers retirement before the death of his uncle draws him into conflict with Cezare Borgia. The formula from there is rather standard for those familiar. Climb towers to un-fog the map, complete tasks in the open world to fight your enemy, progress the story with major missions.

Now, notably in this game you often work with Machiavelli, the philosopher. Now, I’m no scholar of Machiavelli so can’t comment on that aspect. I am aware that Machiavelli and Cesare Borgia have some animosity in our own history. We might all be more aware of Machiavelli through osmosis. To call something Machiavellian is to note its cunning nature, especially politically. Most are familiar with his idea that it is better to be feared than loved. Though it should be noted that his suggestion that both was the ideal state. If you know way more about Machiavelli than me, feel free to comment below. The reason I wanted to mention the use of Machiavelli is the series is because of the way the series uses historical figures is interesting.

Machiavelli notably praises Cesare Borgia in one of his most notable works, the Prince. Cesare Borgia is the main antagonist of Brotherhood. Machiavelli was also killed by the Medici family once they regained power. Ezio’s family worked with the Medici family in Assassin’s Creed. The Assassin’s Creed series concerns the central conflict of Templars vs. Assassins. This conflict can often be boiled down to order vs. chaos, tyranny vs. freedom. As a result, the protagonists of each game often fight against an unjust state. So it’s interesting to see where the game positions the player.

One last thing I wanted to look at was one of the missions. During Ezio’s early time in Rome, there are missions where he can relive his early flirtation with a young lady when he himself was young. Ezio within the series is quite the Casanova, having at least four notable love interests across the series. Now, in this mission, Ezio is told by his brother to just go up and talk to the woman in question. He botches the attempt and then states that he can make a better second impression. The mission then has Ezio tail the woman home and try not to get caught. Then she is confronted by Ezio’s rival, Vieri, who tries to force himself onto her. At this point, Ezio makes himself known and beats up Vieri. This wins the approval of the woman who offers him a second chance.

There’s a lot to unpack there. Suffice to say, I don’t think that’s how things work. Her response would be akin to ‘Thanks for helping me. Wait, why were you following me? Please respect my wishes and leave me alone now’. I can’t believe I have to say this but don’t lurk after women. There’s no way that being followed is endearing. I mean Ezio’s brother has the right of it at the start of the mission. Just talk to people, a good conversation will be more successful than stalking her and beating up her attacker. So, that mission bugged me. Mostly it bugged me because of Ezio’s later status as a Casanova. The context we have of current Ezio suggests that somehow that was the right move when it 100% was not.

Please let me know your thoughts through this questionnaire.